– A House To Be Experienced-

At the core of our basic needs, men  truly just want a connection, be it through real people, real stories, and real materials (metaphorically and literally speaking).  In this blog post, Real.m wanted to explore the connection people have with their homes.  What makes a home?  And how does one connect to it?  We were privileged enough to enter and experience a green-designed house that embraces Spatial Volumetric Continuity of uninterrupted visual connection within the house and out.  Here is a home more than meets the eyes.

Welcome to the “Bug’s Life House”. 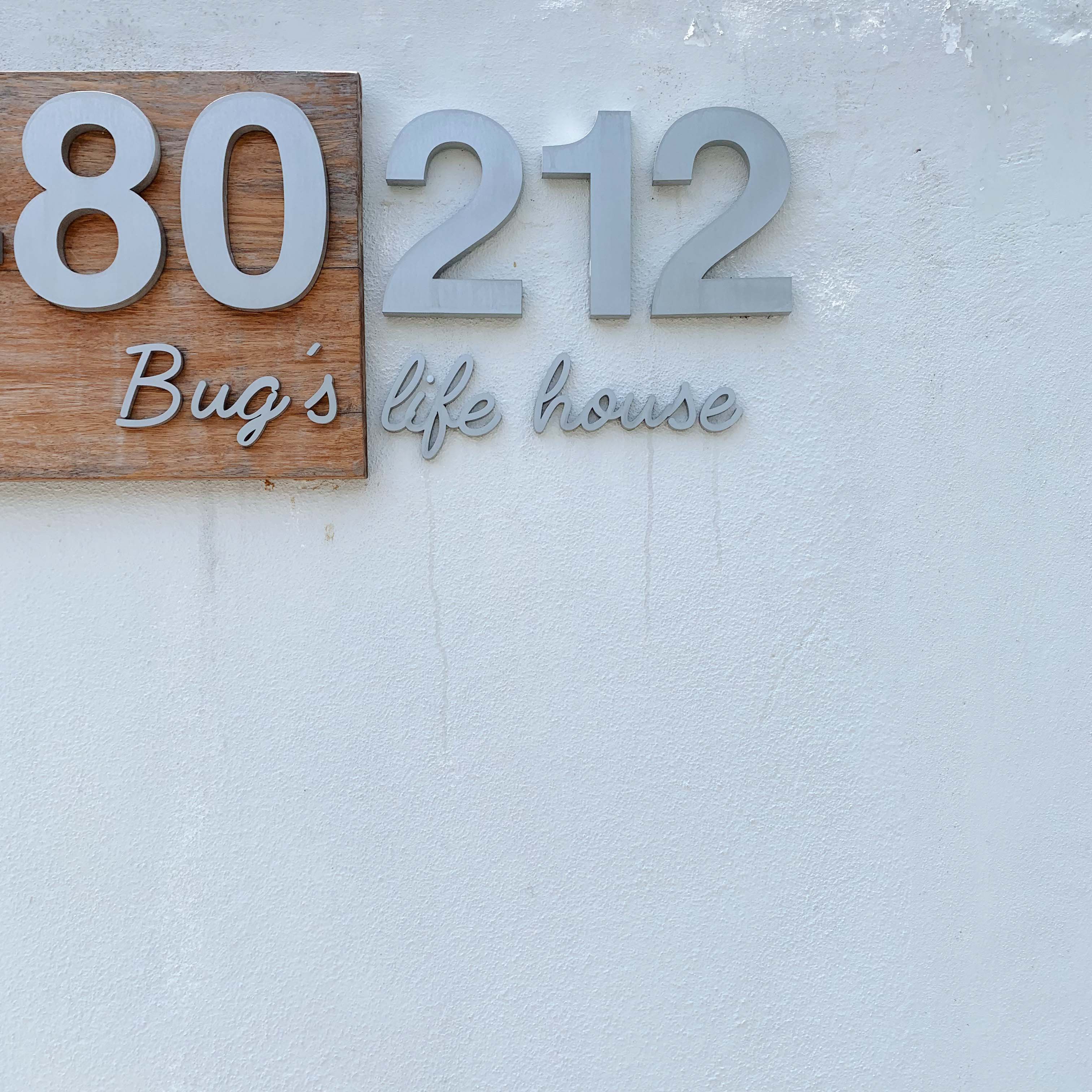 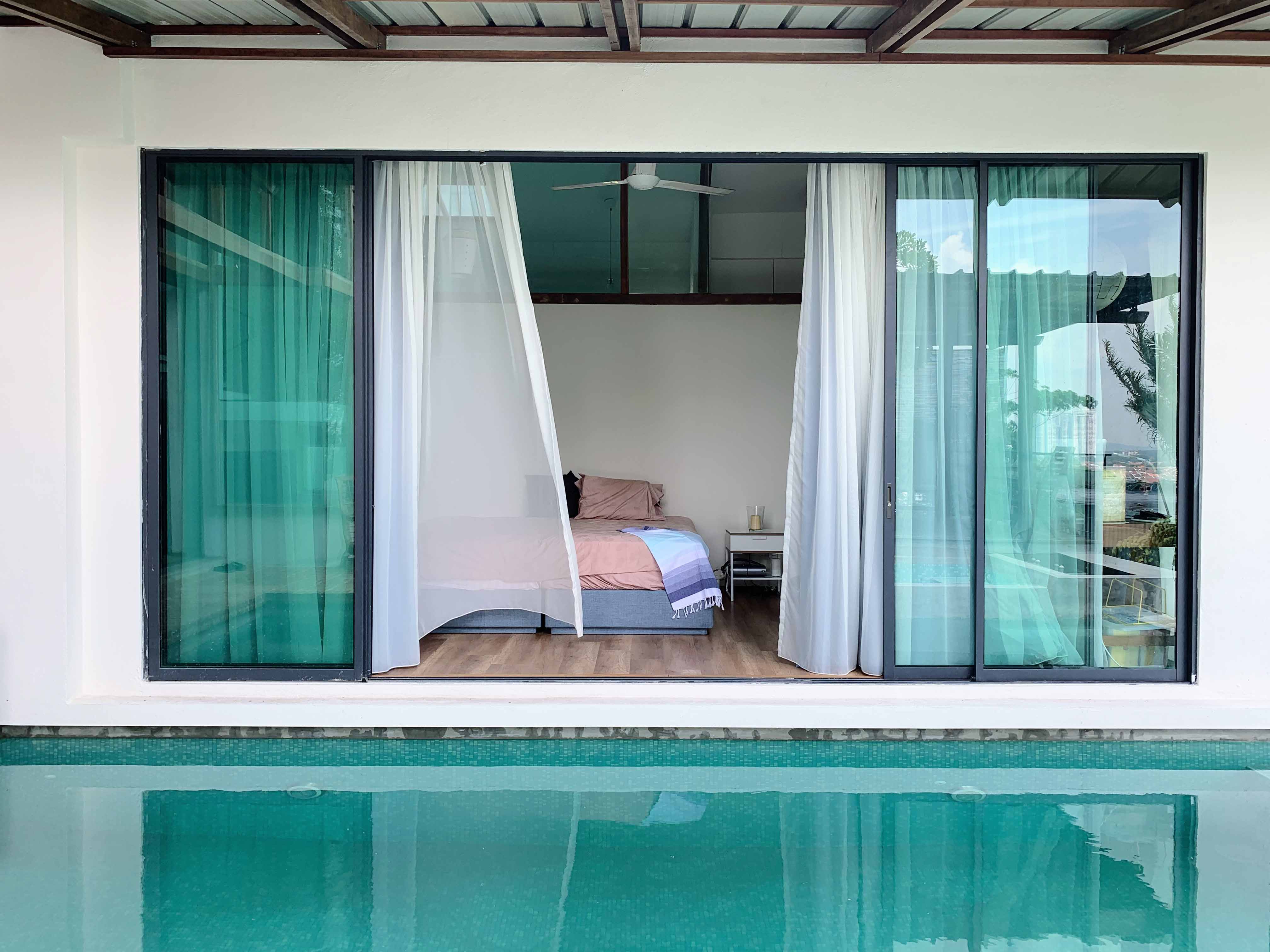 Nestled atop a hill in TTDI almost off the Penchala Link highway, is tucked a simple house.  It is a humble structure with bare white walls, galvanized iron fencing, non-decorative windows framed by unpolished timber, housed under basic roofing. Understated and unassuming, the house with a “Bug’s life house” signage does not seem like much. 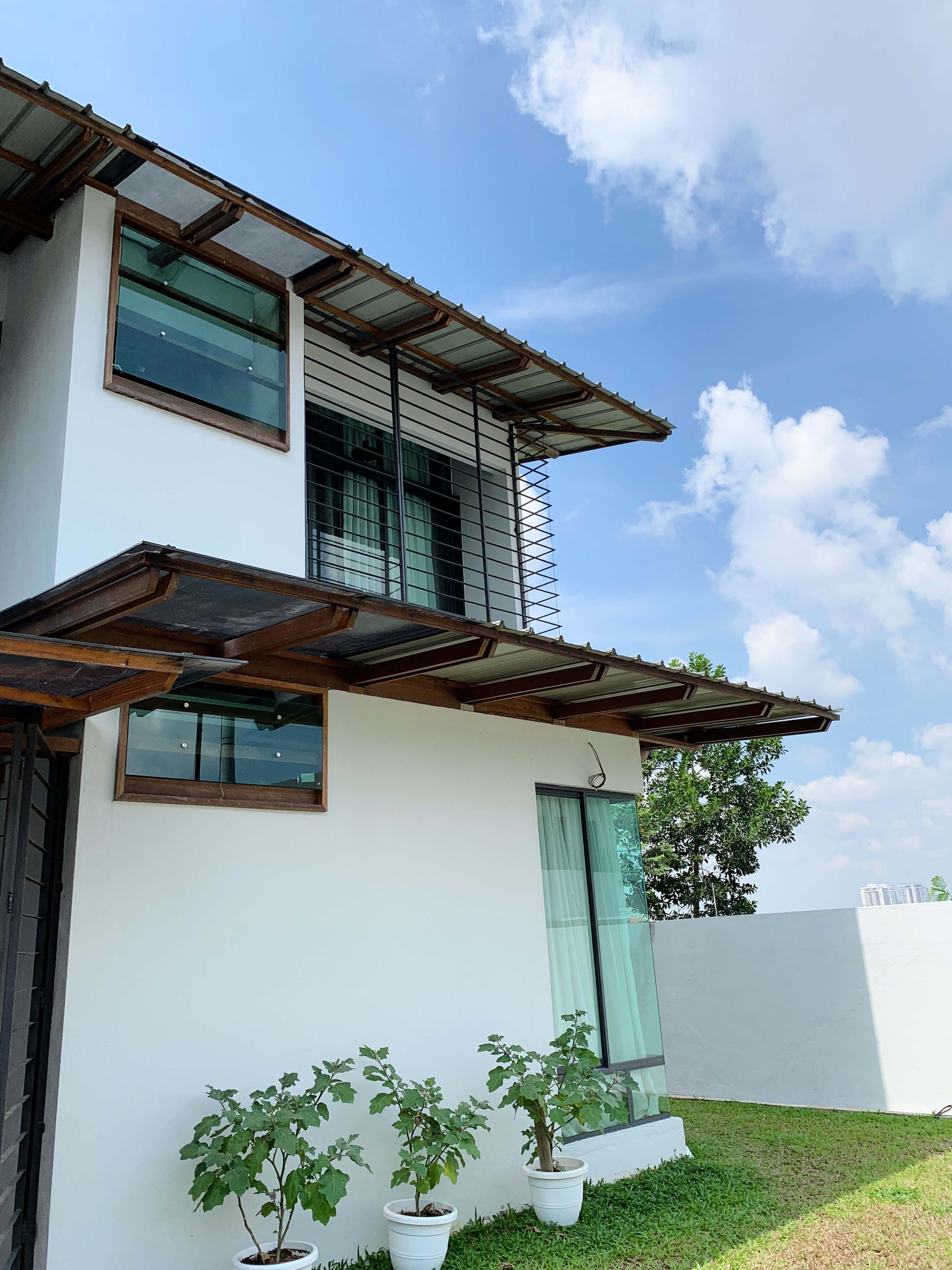 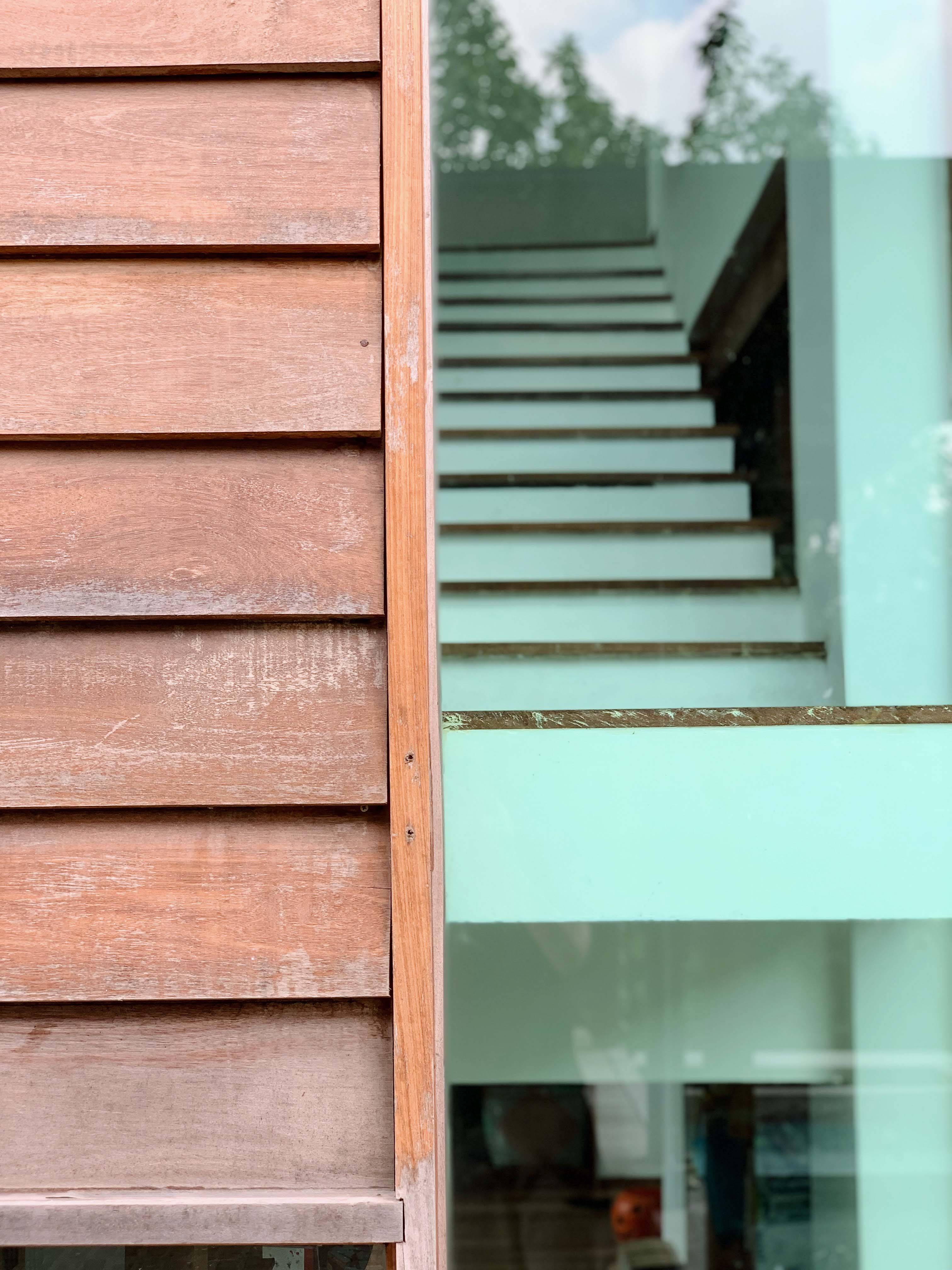 But what lies within, is a whole different story.  It is occupied and alive. 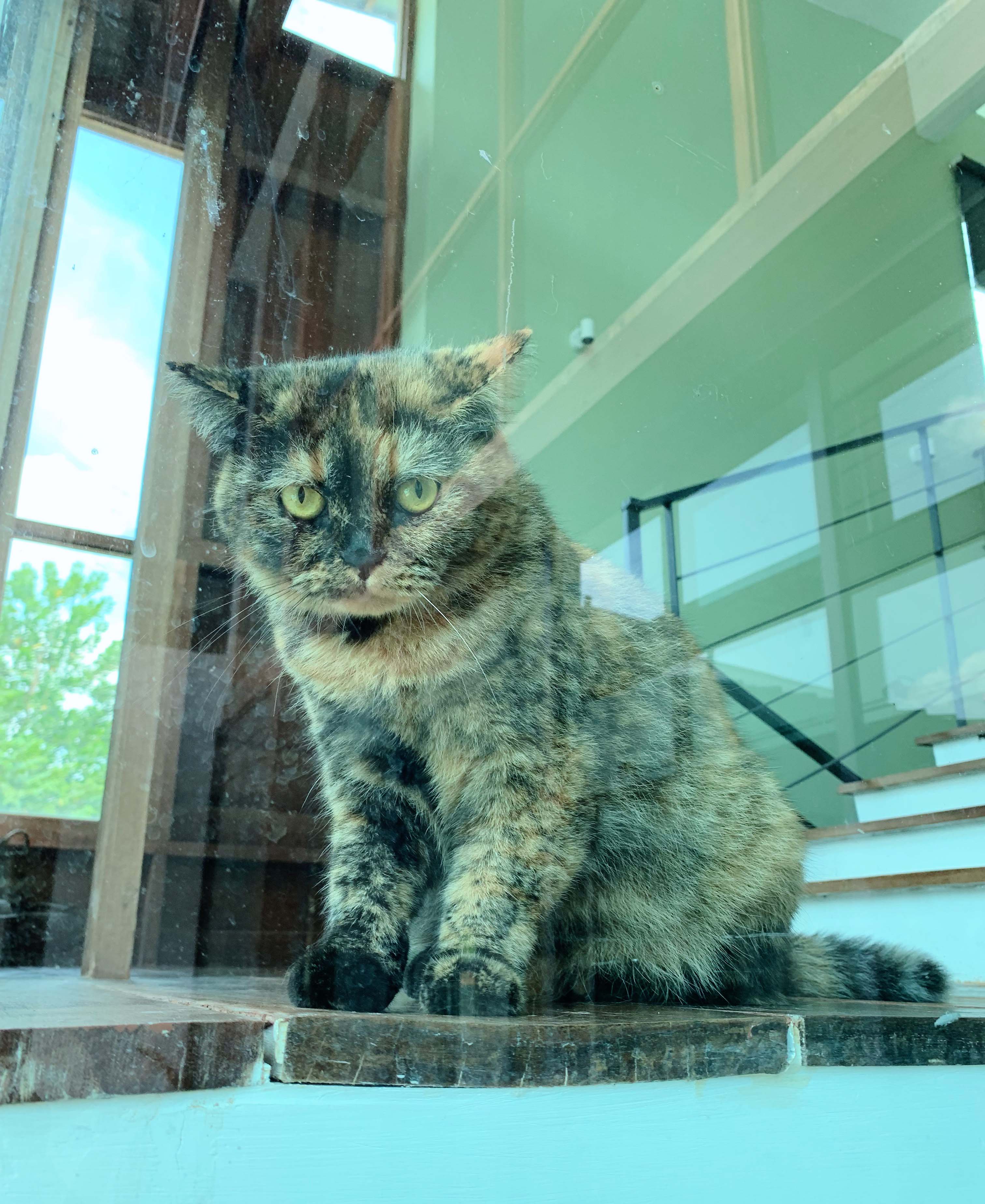 Designed by Roslan Abdul Ghani, a Malaysian architect of over 25 years, this house was accumulation of his practical knowledge put together in a pot.   What he wanted to design for his client was a home that is to be experienced, not admired; to be lived in and grow with, not a fixed space confined to a certain style nor era.   He also wanted to design a house that would consume less energy and resources.

So how does one experience and find connection to a home?  In the architect’s point of view, is through visual connection one gets throughout.  “Academically put, you have to celebrate the architectural journey by creating continuity within the volume,” commented the architect.  By designing a plain façade, creating visual ques, to designing an open-plan house, and orientating the opening of house towards the South, the architect managed to create a very intimate and serene environment for not only his client’s family to live in, but be felt by others who has no knowledge of any of his designs intentions. 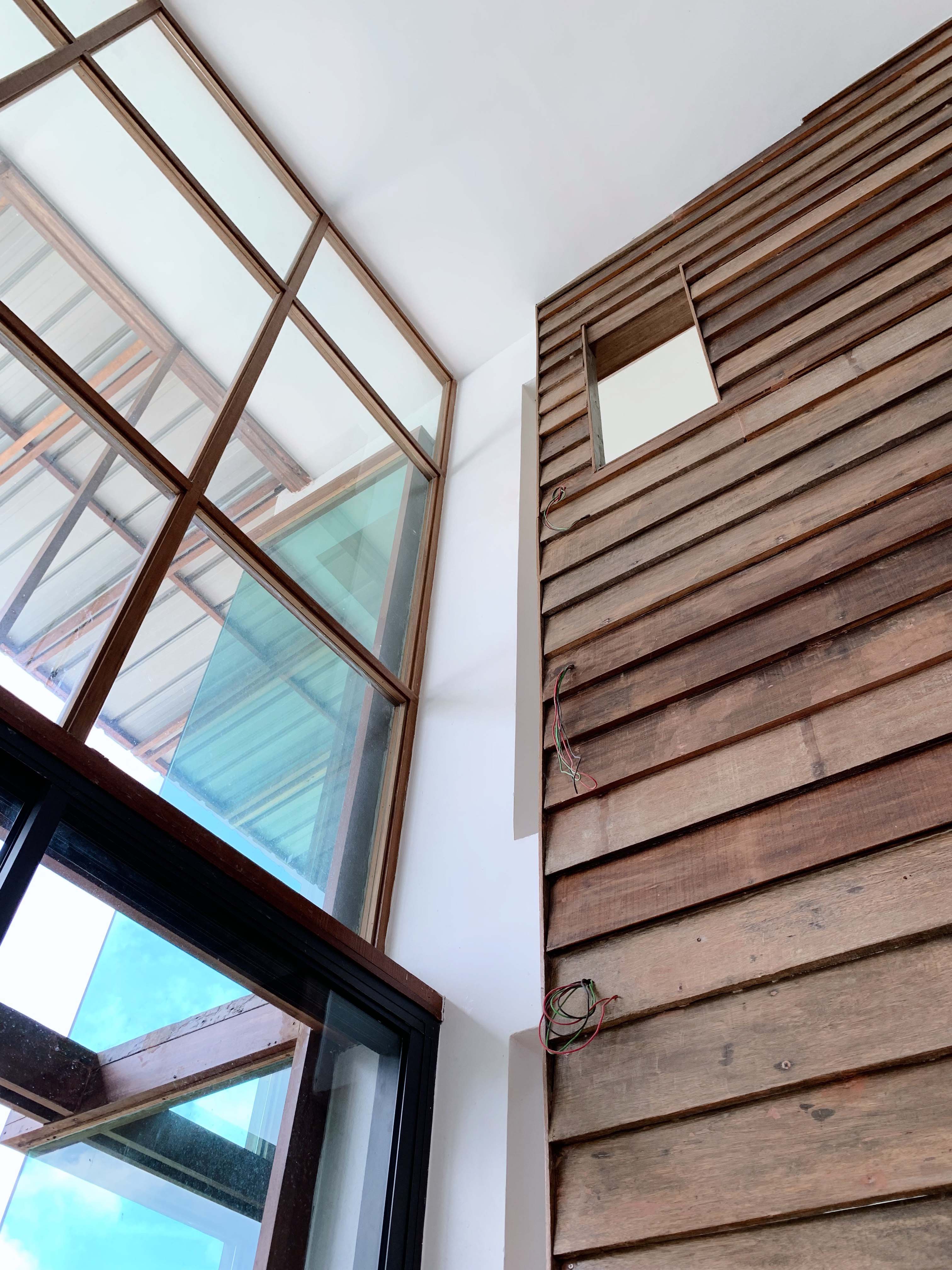 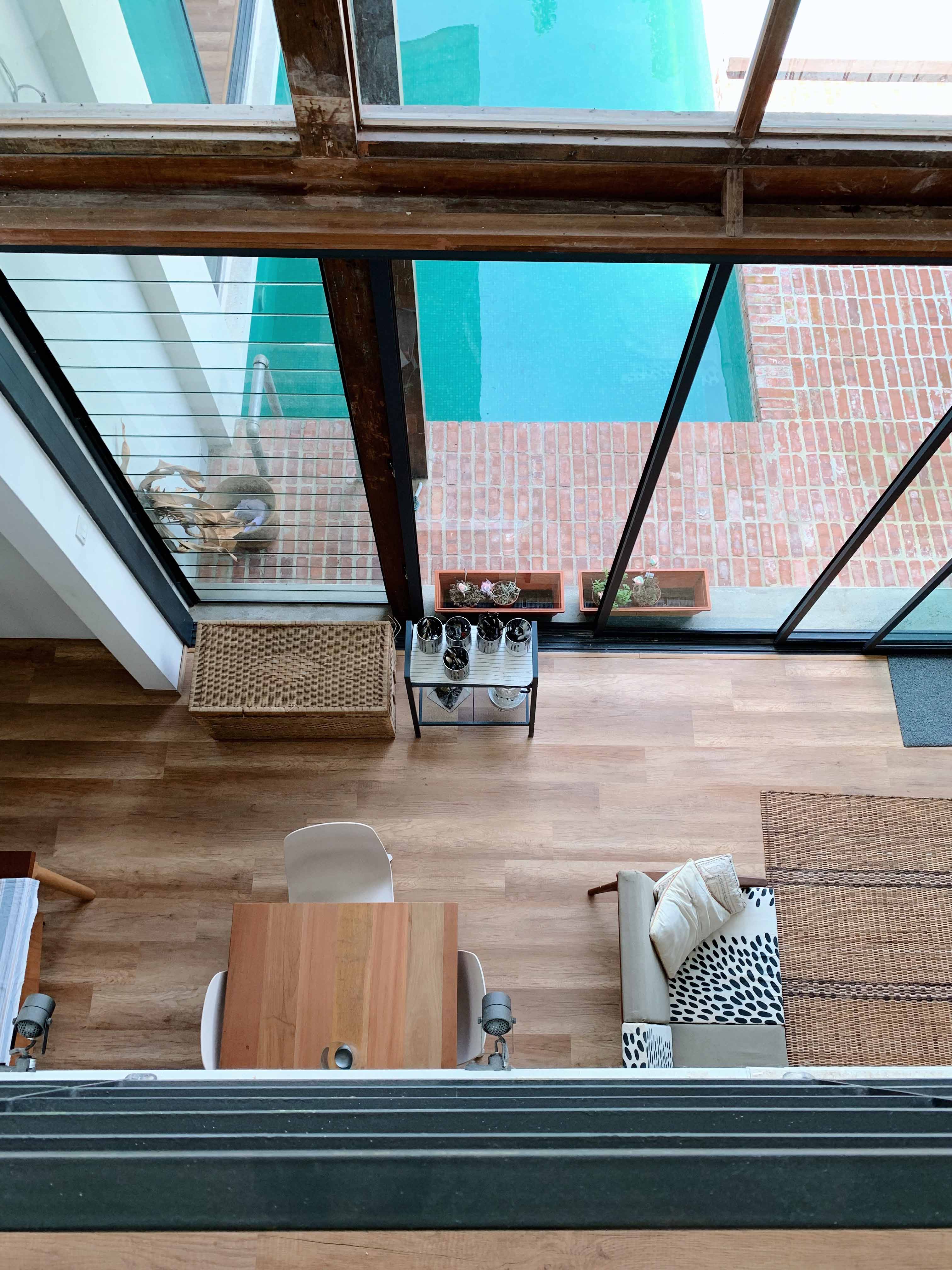 The visual and physical journey one experience from the outside-in is subtle but meaningful.  Take the plain exterior for one.   The understatement from outside was very intentional.  It is to act as a mental barrier from the outside-in.  The treasures of the house lies within.  With visual ques, the architect designed the house to allow users to seamlessly guide themselves in.  One would naturally know where the entrance to the house is, by the shadow casted over the semi-covered foyer.   Once inside, one’s eyes naturally and slowly gets drawn inwards through its cozy low ceiling living room which gradually opens up to a bright double volume lounge area.  Washed in natural light, the lounge area pulls you back outside through a vast floor-ceiling glass wall panel that offers uninterrupted view of the pool and greeneries outside. One can’t help feeling that once inside you are back to the outdoors. Here in the lounge where the owner of house hosts his coffee machine and television, is the Heart of his house; the central space that speaks to the nature outside as well as the family within.  In this lounge is where the full connection to the home is felt. 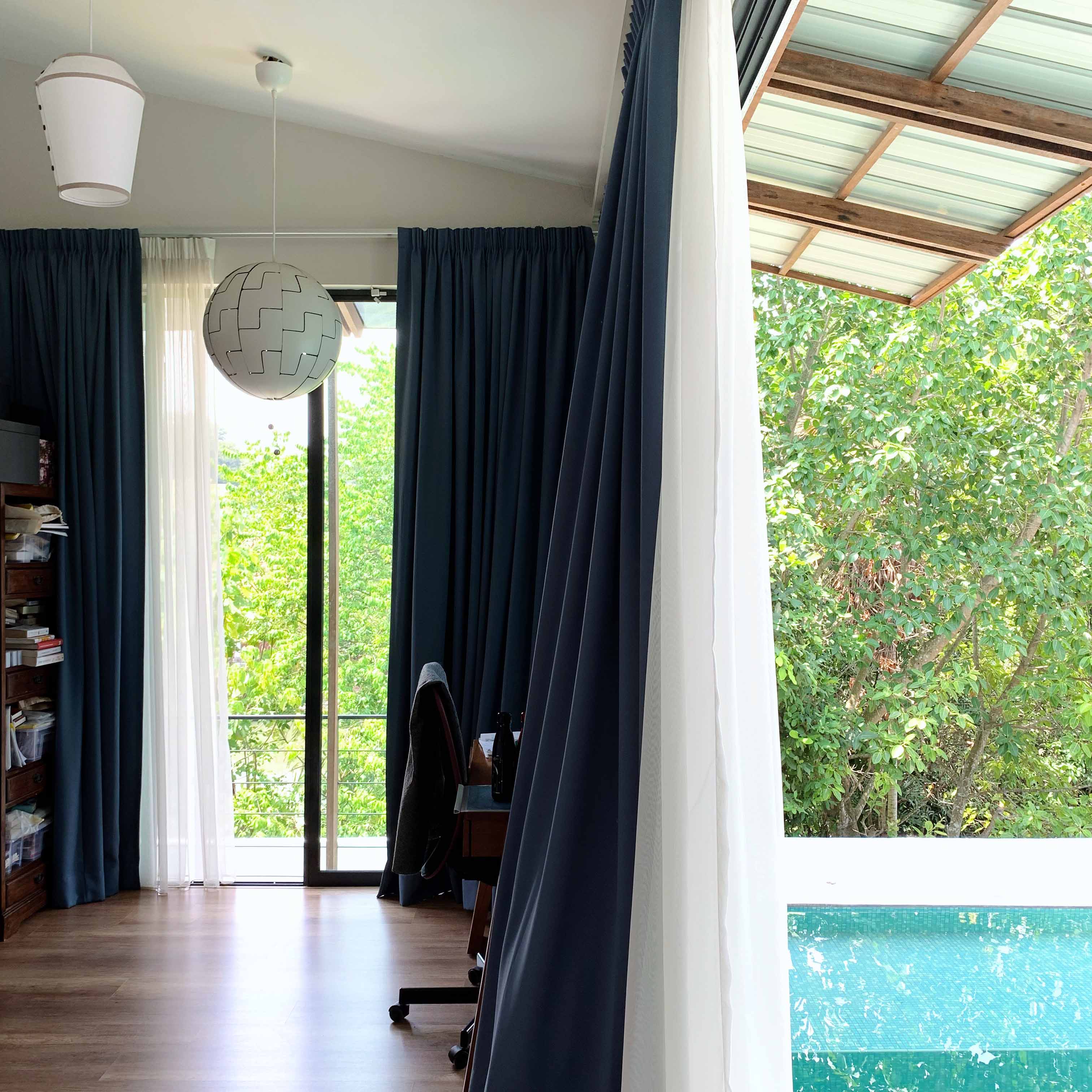 In the attempt to keep visual connectivity, the architect’s open plan design allows one to walk through a slow progression of visual image that makes you feel that you are a part of the whole house, its external natural surrounding included.  From the lounge (which is part of his dining and kitchen areas), the living room, bedrooms and formal dining area can be seen as the house is a comely sized home. It is within this space also one is connected to the second floor, as the view of the balcony of the second floor is captured within the double volume space.  From here also, you can see the entrance by foyer that just opens up straight to the back of the house – a clear linear visual connectivity, which creates that sense of intimacy yet openness within the house. 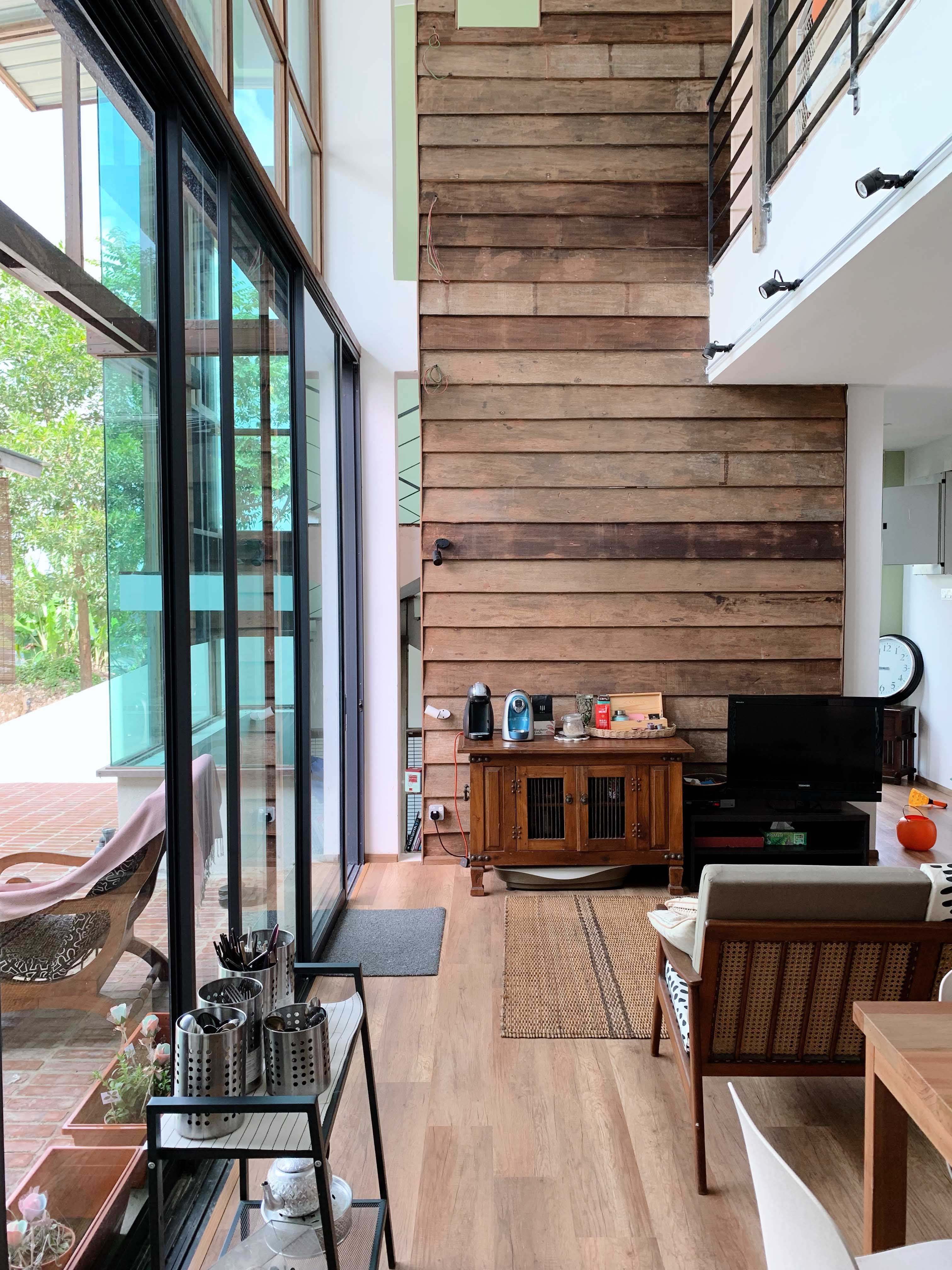 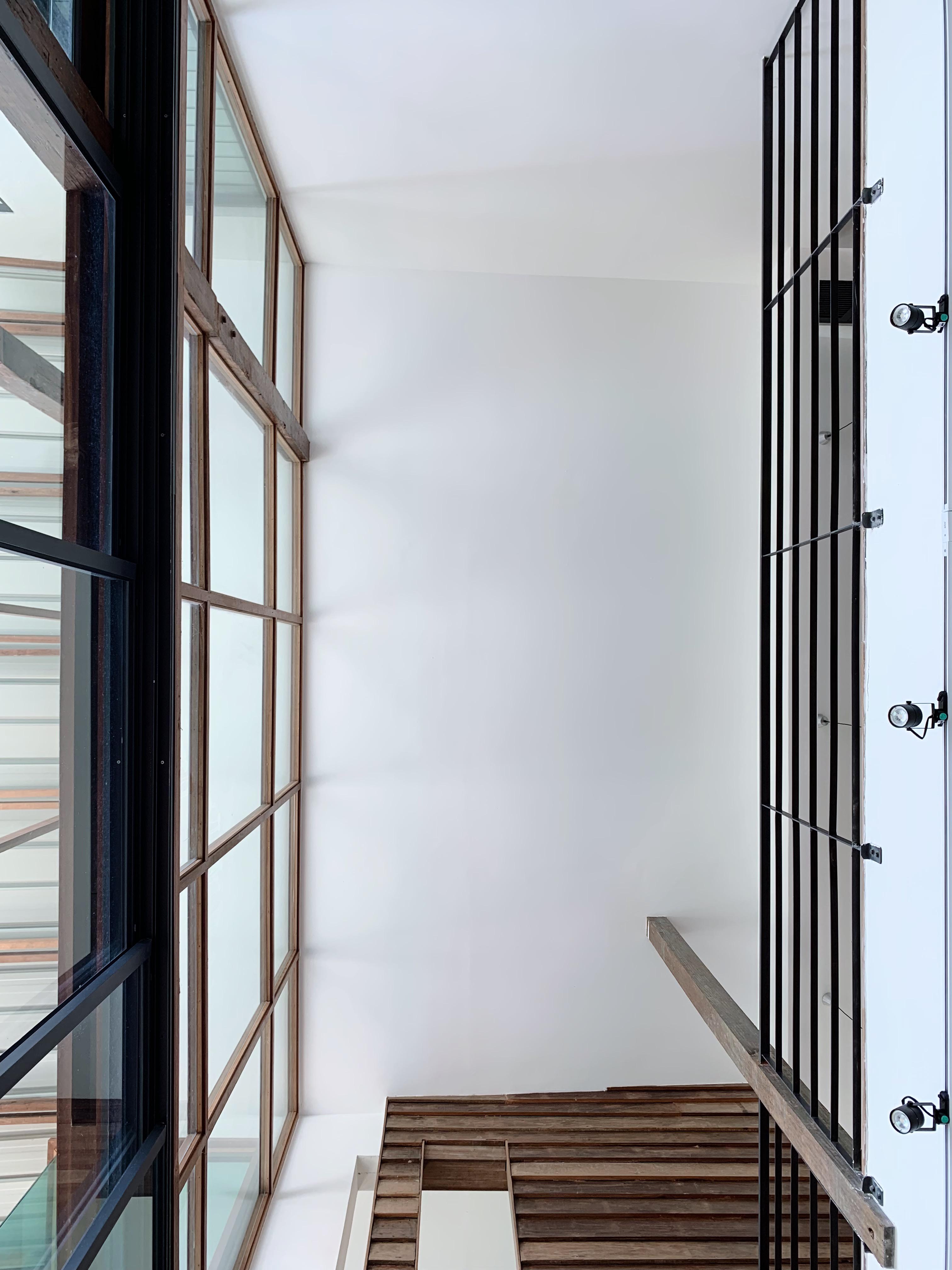 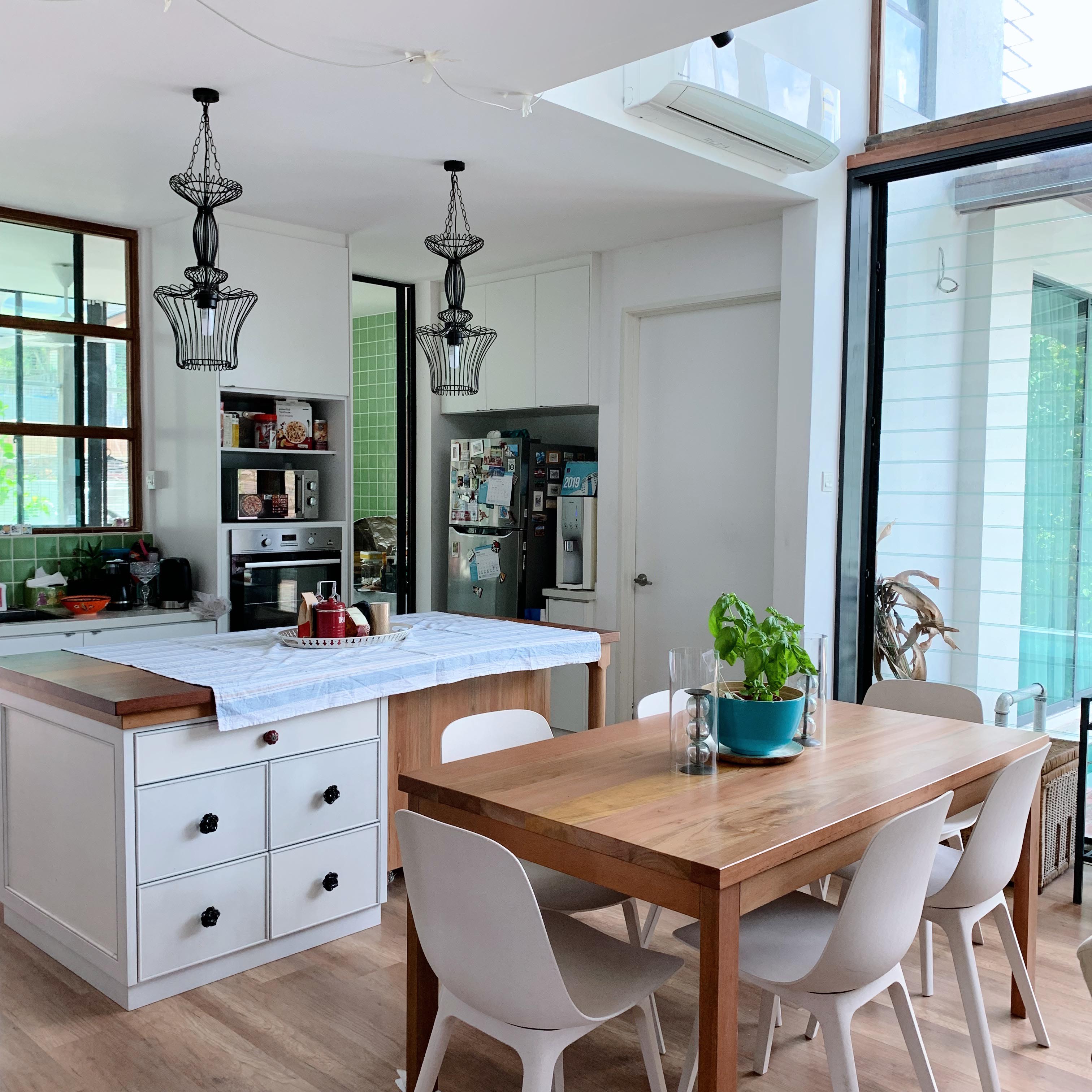 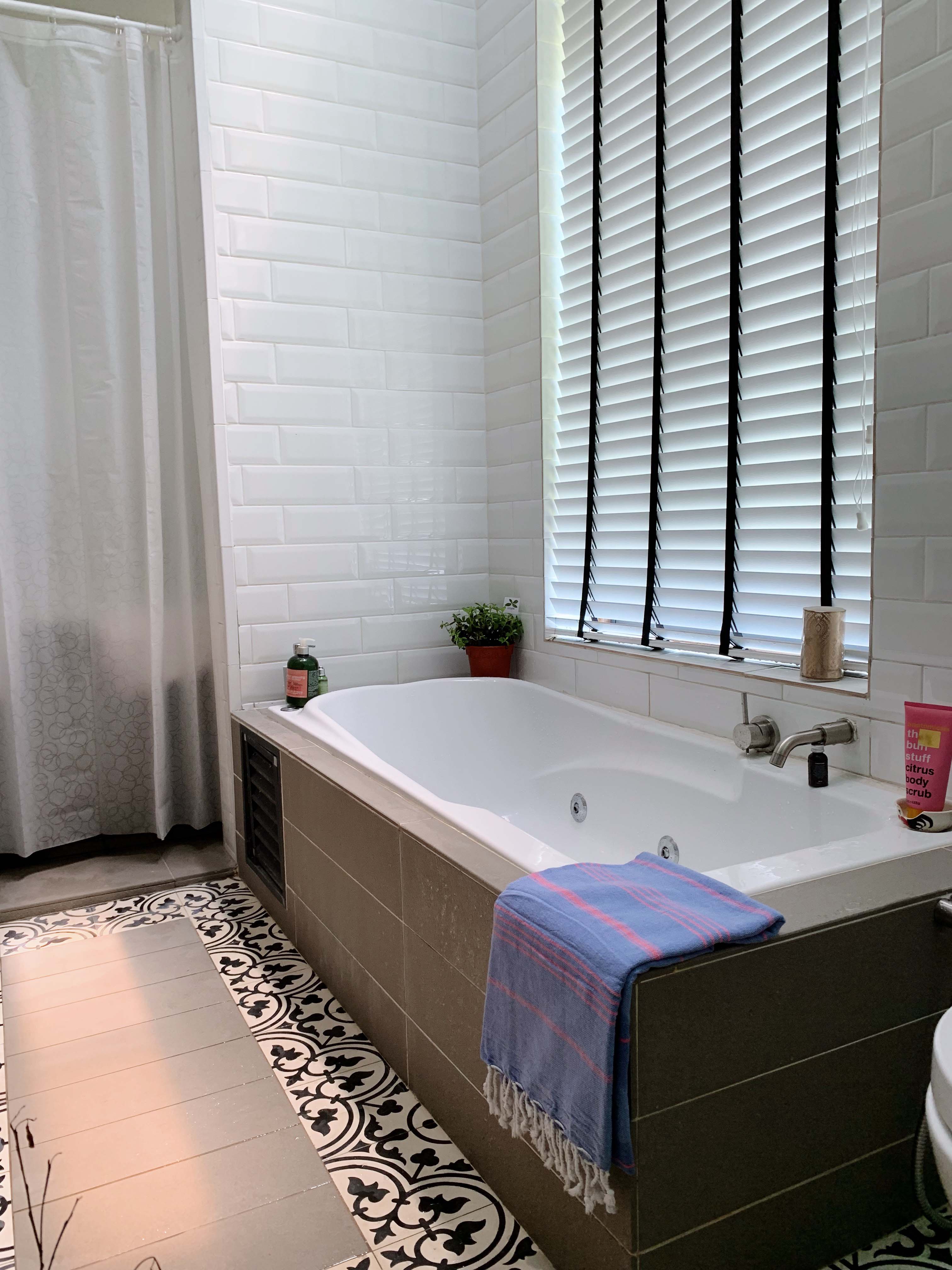 To keep openness a continuity, there are hardly any walls sectioning off the semi-private spaces.  Wall partitions are either inbuilt wooden shelves decked with the family’s reading collections, or inbuilt cabinets for storages. Even the house’s semi-basement unfurls to the garden and greenery beyond. 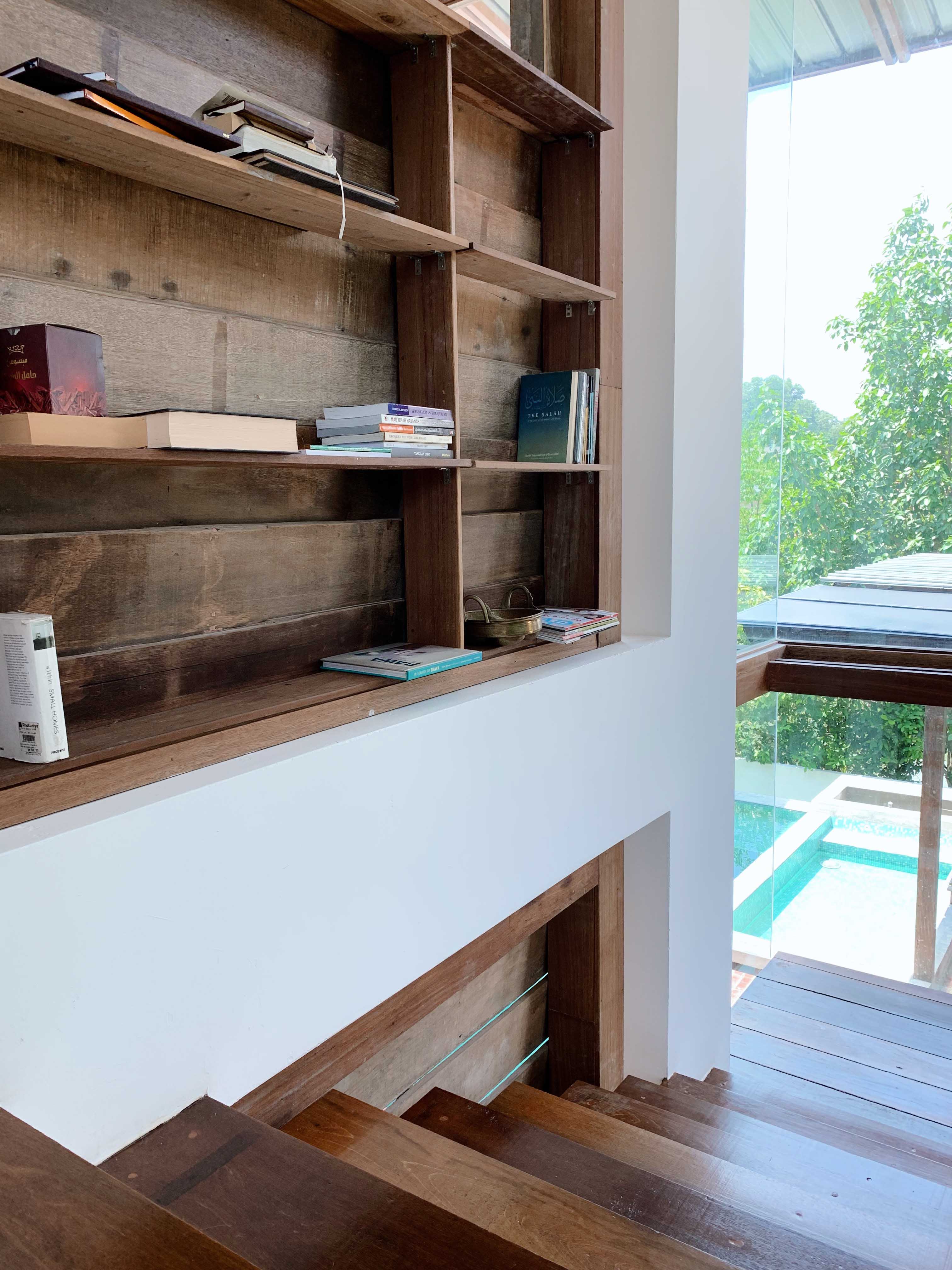 There is more to this house than just its spatial planning. The design approach was meant to be energy conserving and have reduction in waste. The raw timber finishes on the house’s window frames, staircase, wall features and even roof structure were of recycled old timber-houses sourced from Ipoh and Kelantan, a process which took the architect three years to collect Chengal wood. Doing so was more cost saving than buying new ones. Old timber are studier as it has been weathered and requires no treatment. Plus, one does not have to chop down trees for them.  We personally find it charming that 80% of the timber used in the house were of recycled demolished timber houses. 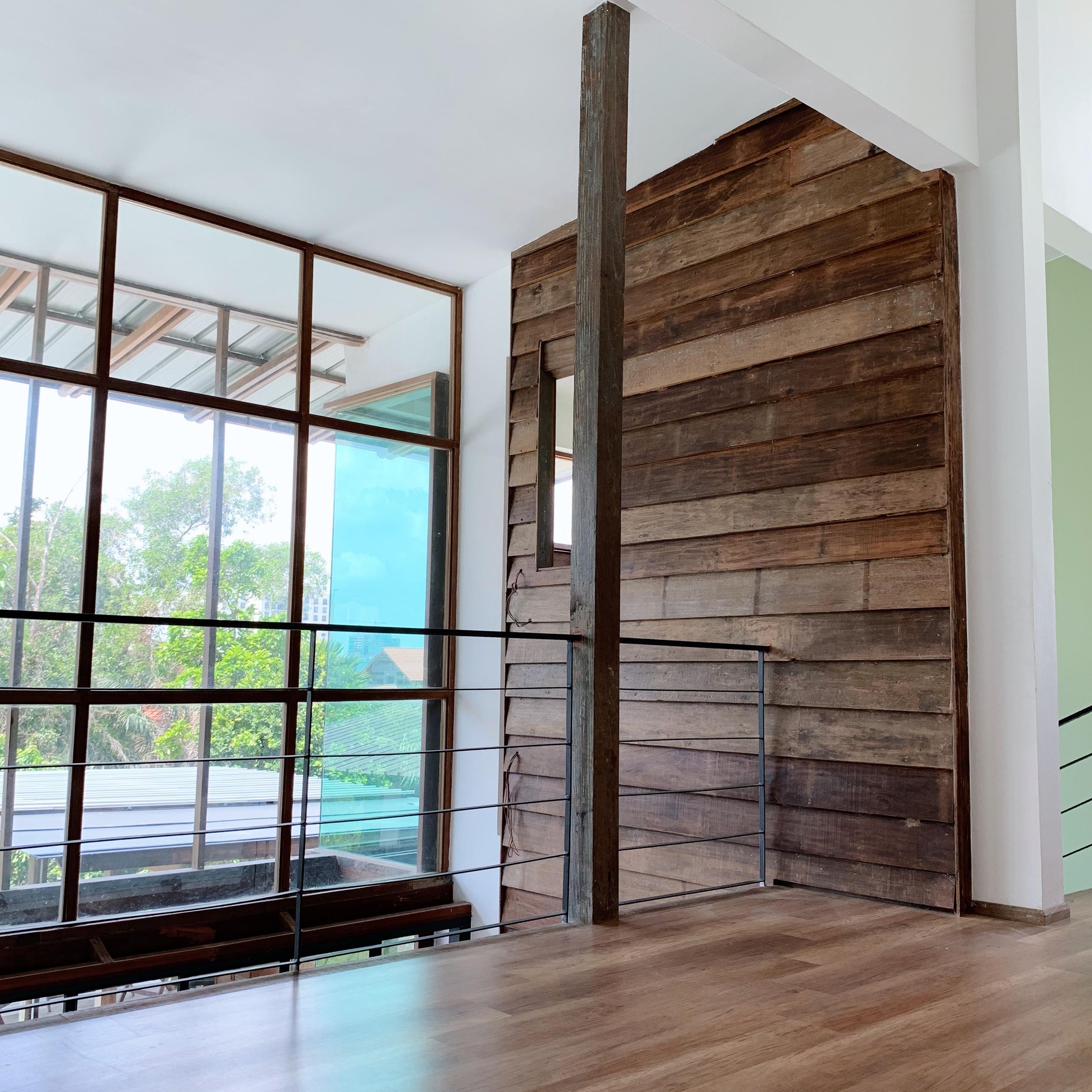 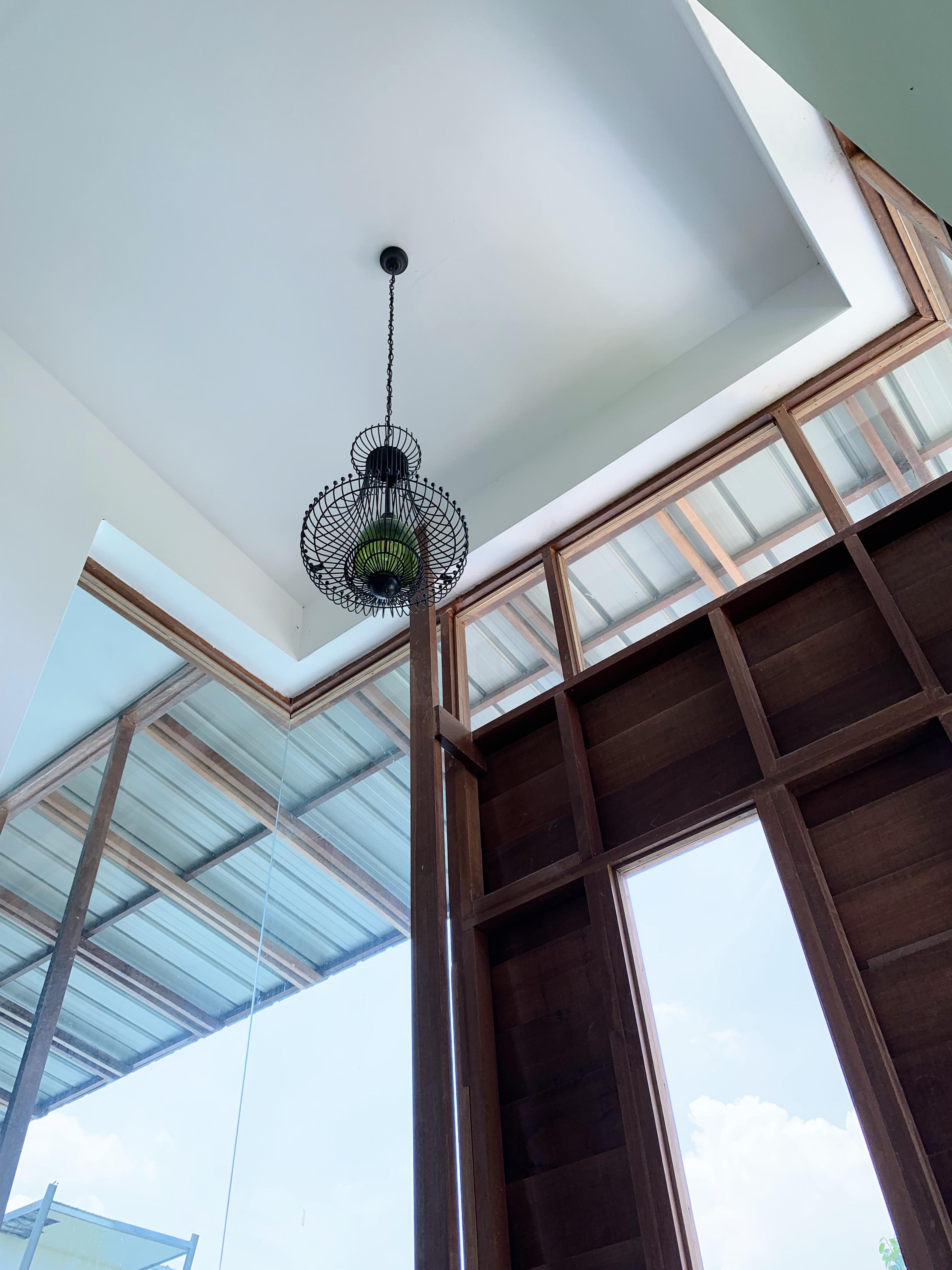 In line with keeping the house green, orientation of the house plays a vital role. Situated on a slope facing South, the house’s “face” just naturally opens up towards the slope with majority of glass facing South, where one can evade the afternoon sun coming from the North and West. Here too is his transparent staircase that leads up to children’s bedroom, which overlooks the swimming pool and a barbecue deck. 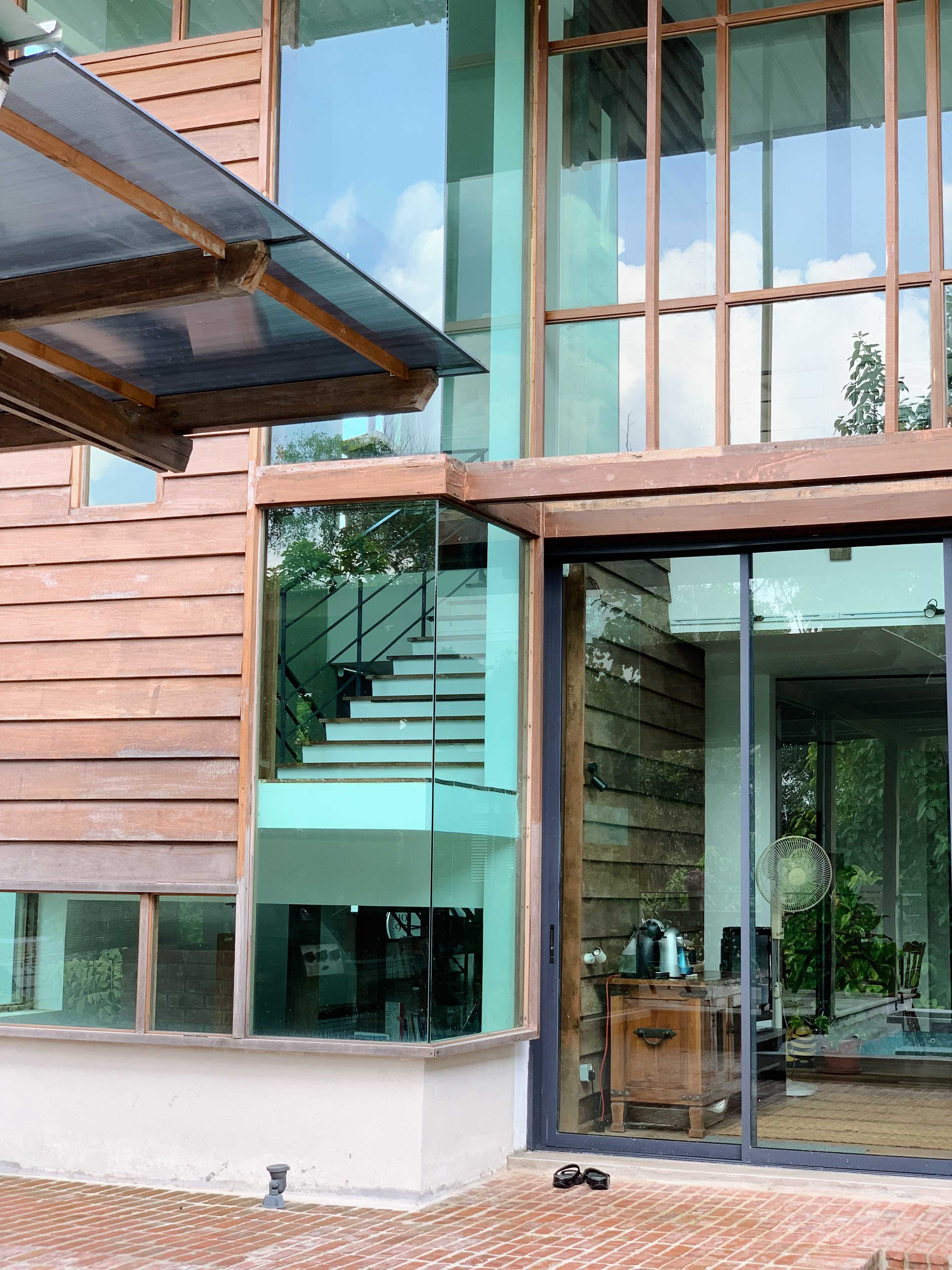 Where sun orientation is to be deemed hottest, the architect punched minimal windows and openings.  Windows situated on the North facing walls are offset by balconies to act as barrier to the sun by giving shade to the rooms within.  The architect thoughtfully planned for ample lighting within the house yet minimizing risk of heating it up. 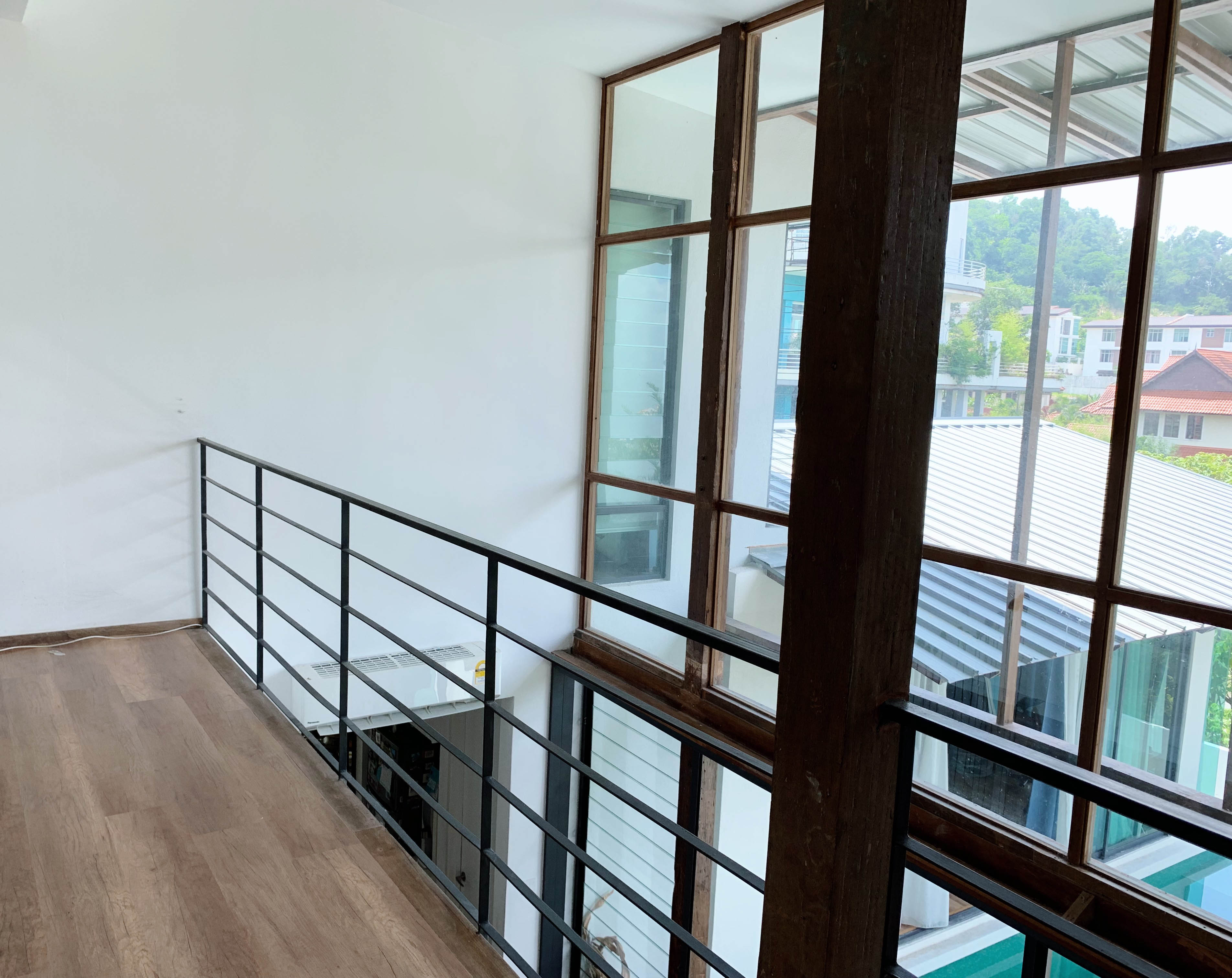 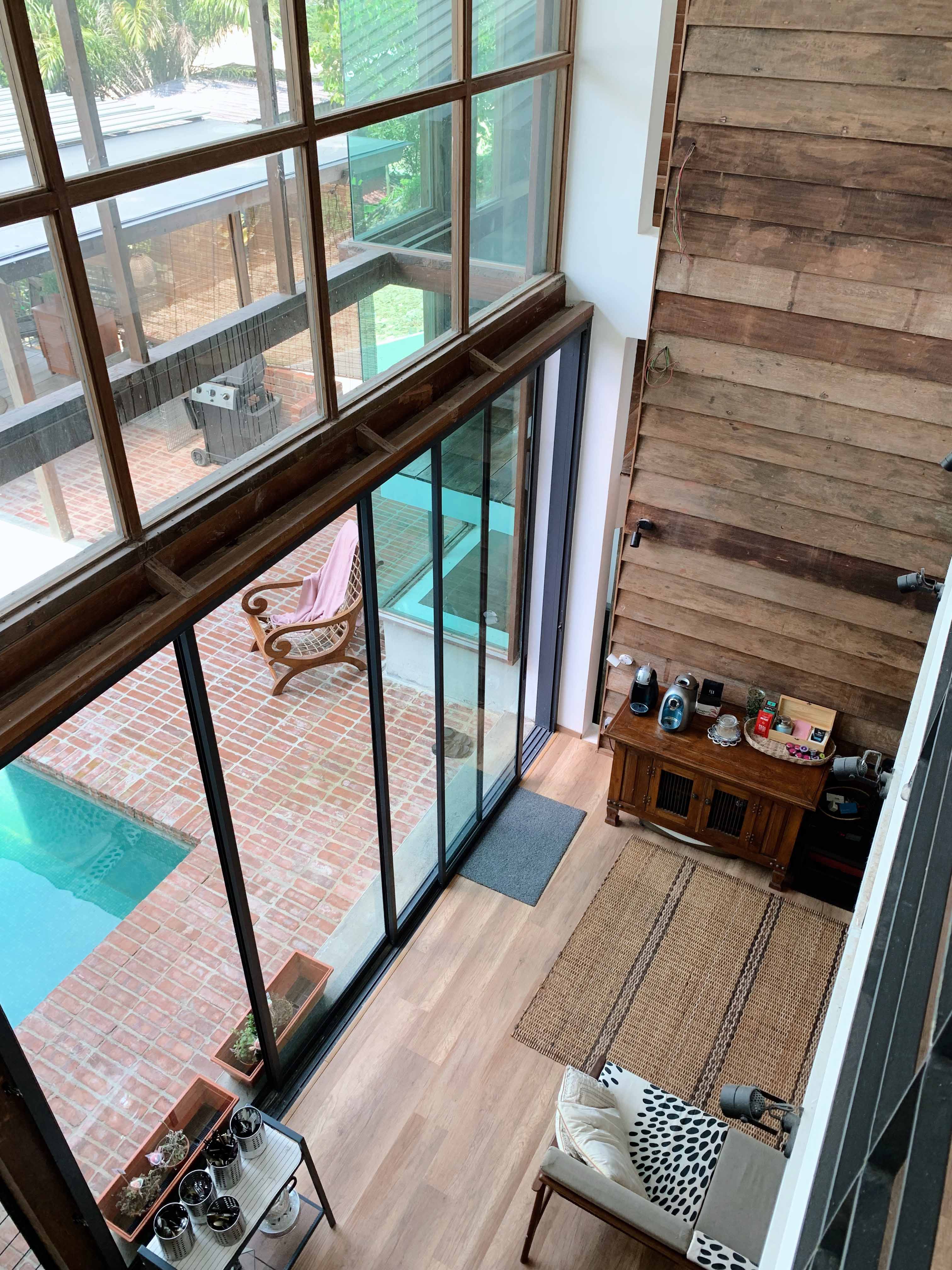 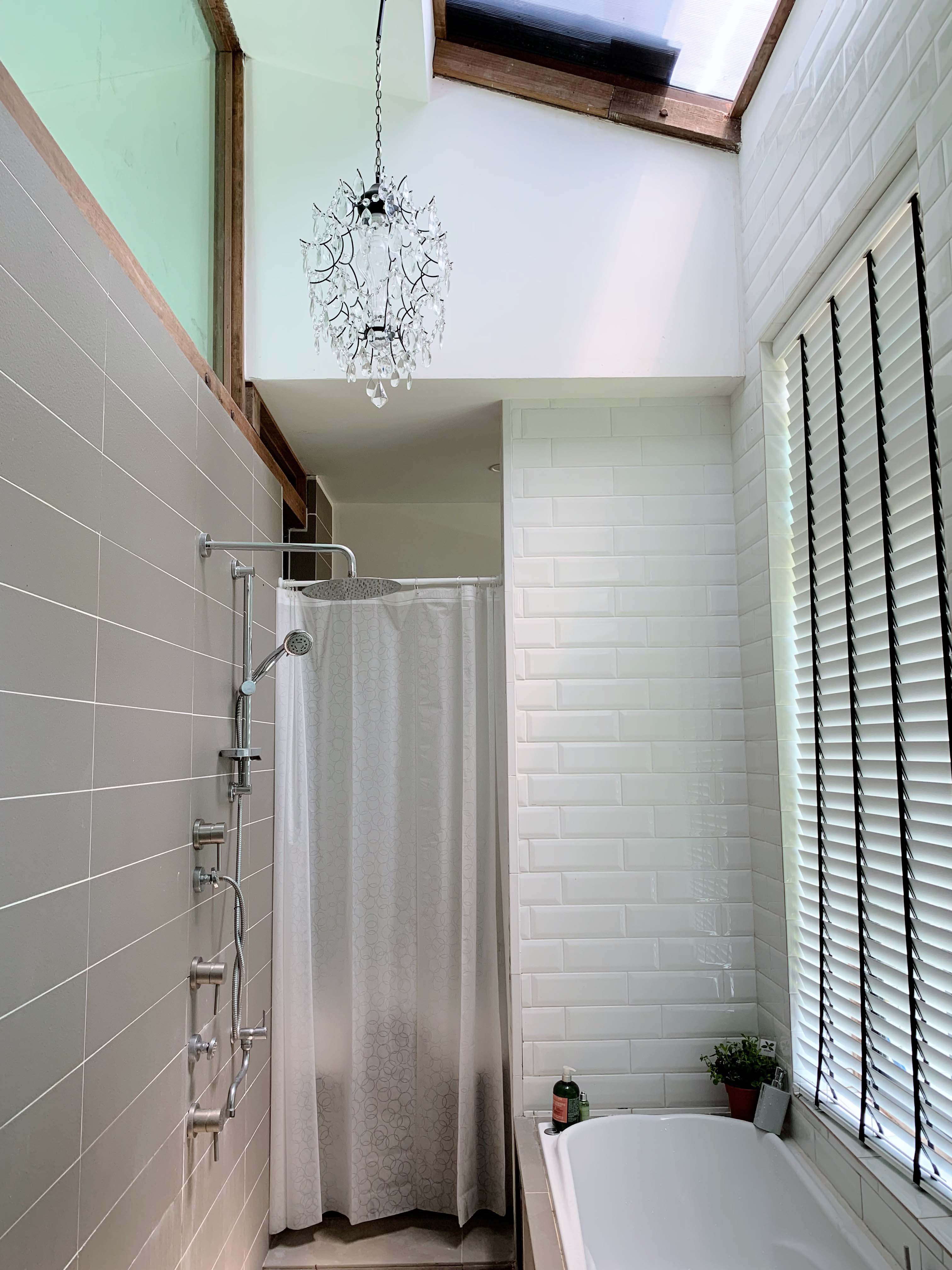 Furthermore the open floor plan are divided by floor tracks, allowing glass sliding doors to compartmentalize sections of the house for privacy purposes and conserving energy, “When guests come, you can close off one section and switch on air-condition to cool only that space”.  We liked the idea that visual connectivity stays intact even when the room is closed off because of the glass doors. 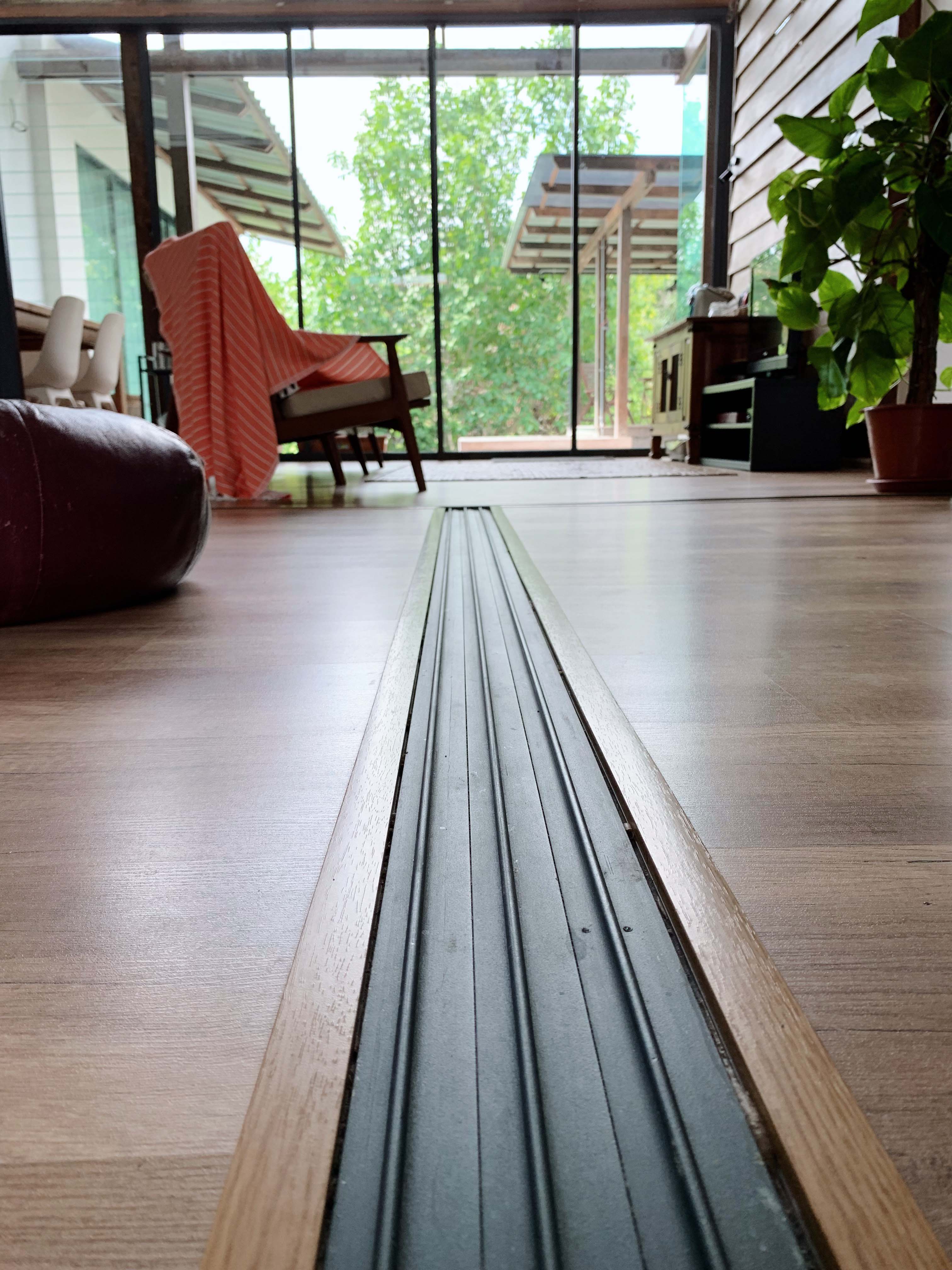 There is no theme to the house.  The house is designed to be organic where by it can fit any types of furniture.  It is also open planned designed to make room for future make-shifts – the owner of house may redecorate the house and shift furniture as and when he feels like it. 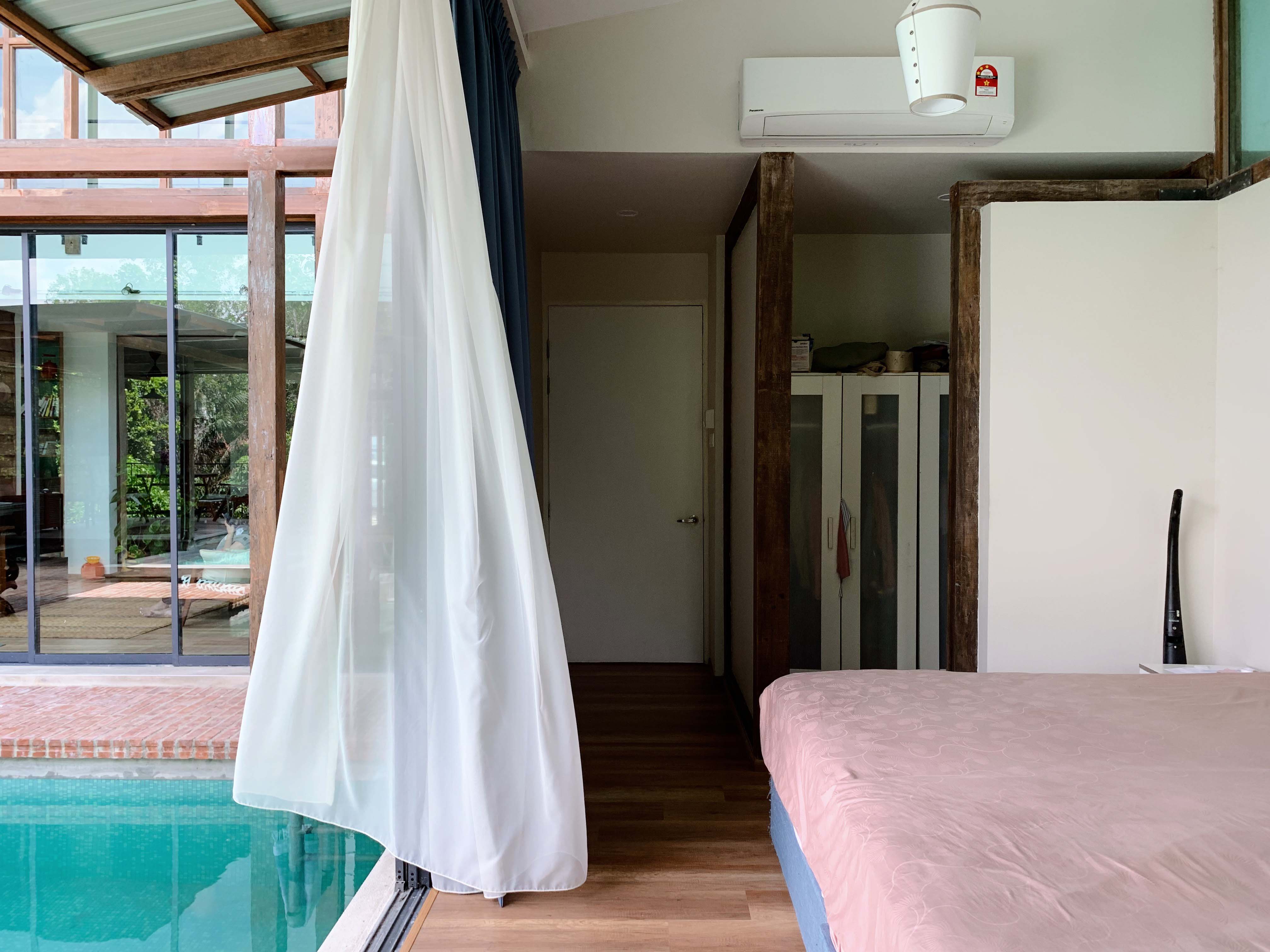 While the owner of house has moved in with his whole family amidst on going works (swimming pool is still being tiled, semi-basement unfurnished, and landscape barely touched), we found appeal in a house that is constantly evolving and a family who is willing to evolve with the house.  “I believe a house should leave room for evolution” adding that when finances allow, the architect would like to add more screens to the windows as he would like to further reduce heat in the house.  When ask him what screens he would opt for the house, his response was as spontaneous as the nature of the house he designed: “I don’t know yet!  There’s endless possibilities!” 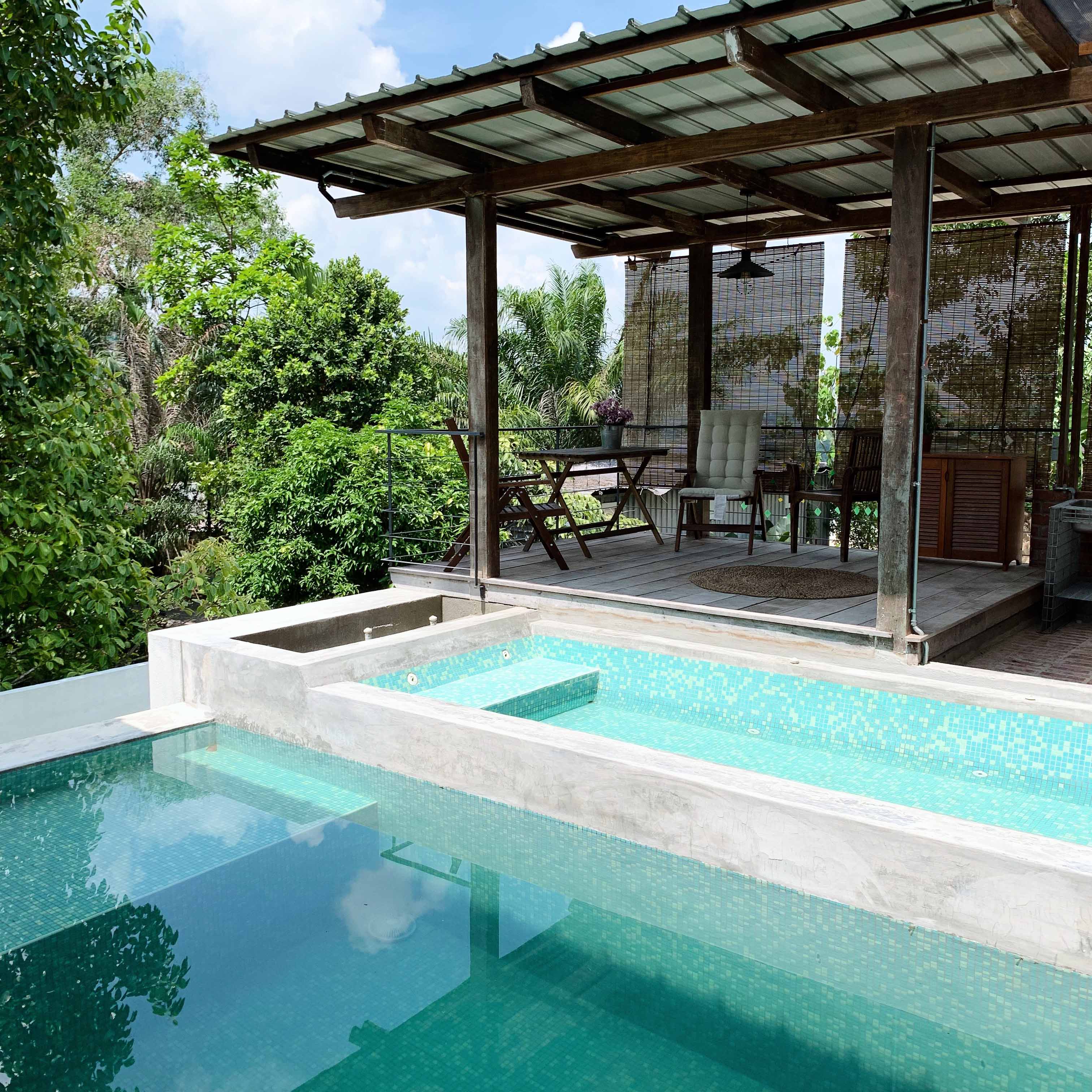 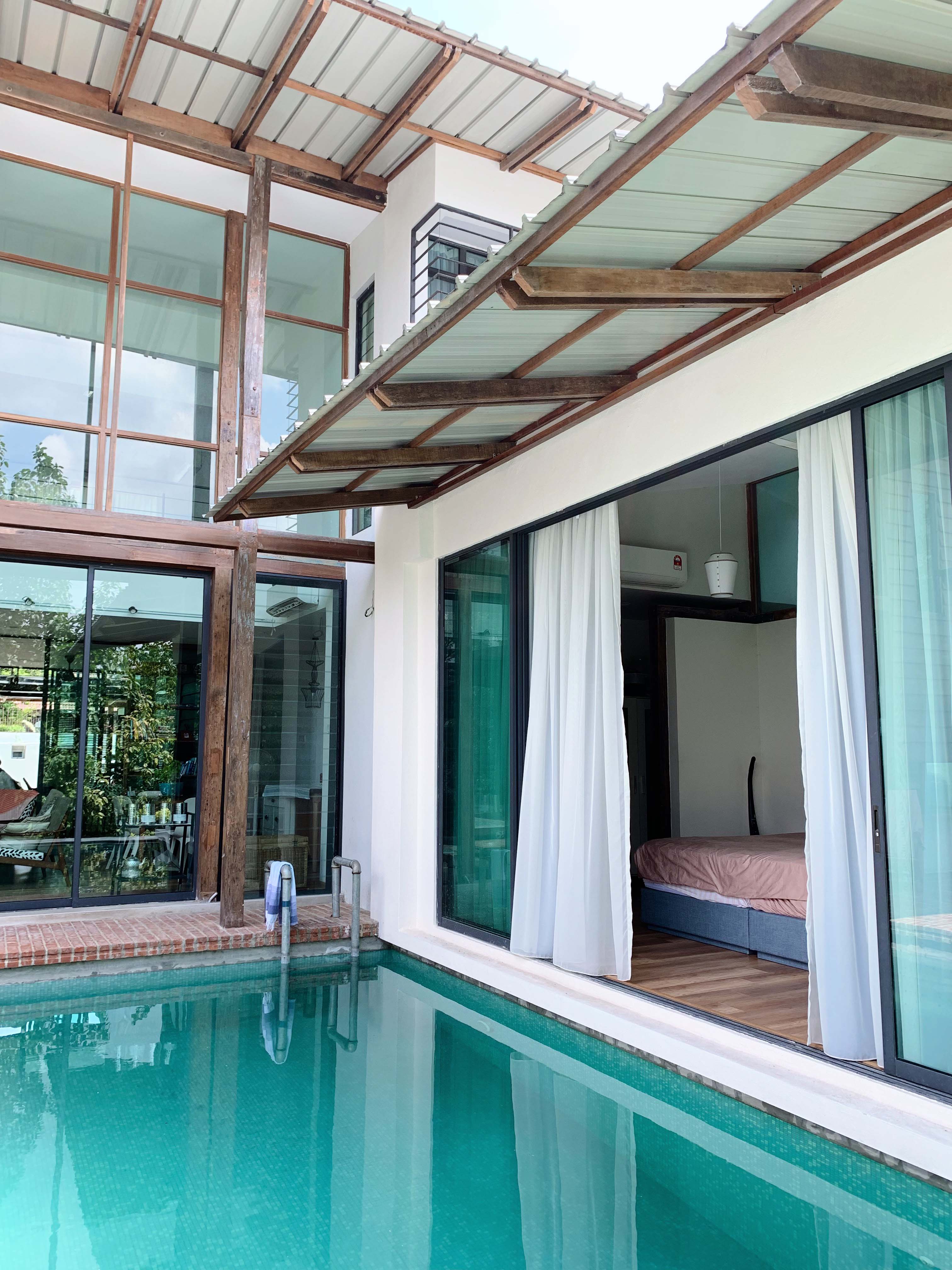 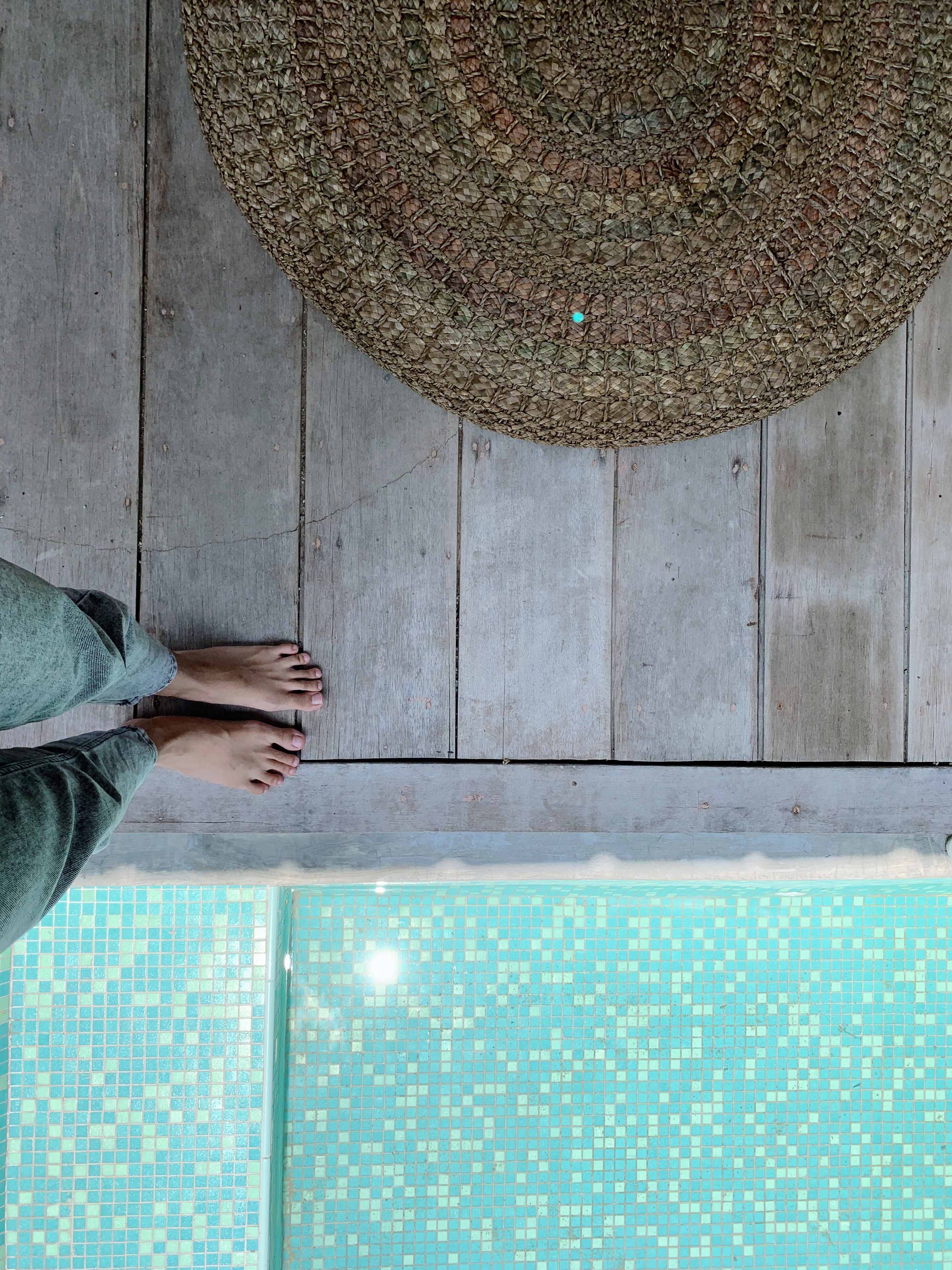 When we asked the architect why the signage, he said it was by his client’s wish as the house has many wondering bugs coming in.  And that is the story of “The Bug’s Life House”.